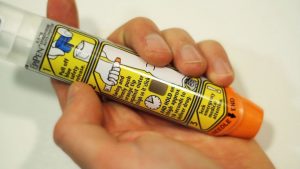 The EpiPen intervention product administers doses of epinephrine to patients suffering from anaphylaxis resulting from extreme allergic reactions.  These reactions, of course, can be fatal if left untreated and, which makes the EpiPen product special and very important.

EpiPen is made by a company called Mylan, which you may recognize from recent controversy over its significant price hikes over the course of last few years.  Mylan bought the EpiPen product in 2007 and then continued to raise the price of the product over the decade to follow—upwards of 600 percent—arguing that maintaining consistent quality of the product was a major reason for the significant price hikes.

In this expansion, Mylan says that the update adds at least 13 more lots of EpiPen (0.3 mg) or EpiPen Jr (0.15 mg) 2-pack Auto-Injectors with expiration dates that fall between April and October.  For better designation the “adult” dose has a yellow label and the “junior” dose has a green label.

In a statement, the company warns that the potential defect could make it more difficult to activate the device in an emergency situation—which, in general, is the most appropriate time to use the device.  This, of course, could have significant health consequences for patients who are amid a life-threatening allergic reaction.

Of course, the company reassures that the defective or faulty devices will be replaced at no cost to consumers/patients. Furthermore, all patients should take comfort in knowing that the whole of this recall is being conducted with full and open supervision of the United States Food and Drug Administration.

Anyone who seeks more information regarding this recall can easily visit Mylan.com/EpiPenRecall for instructions and guidelines.  The company is, however, advising that due to the nature of the need, those seeking to replace their potentially faulty auto-injector devices should still keep them handy, even if they cannot get a replacement. For example, using the product is not dangerous—the recall only suggests that the delivery system may not be as effective—so a potentially faulty device remains better than no device at all.