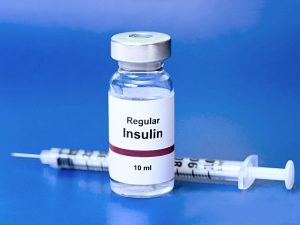 Roughly 6 million people in the United States need insulin injections because they have diabetes, 1.25 million have Type 1.  This is a condition characterized by a metabolic defect in which the pancreas does not create the hormone insulin.  The rest of this population has Type 2 diabetes, which is characterized by a similar malfunction in which the pancreas has malfunctioned and can no longer make enough insulin.

Now diabetes has long been a manageable disease.  In some ways, lifestyle maintenance can help the body to work around the defect or malfunction.  More importantly, though, medical insulin has been widely available for diabetes patients to help stabilize their condition.

Over the past ten years so, however, the price of this very important insulin has risen dramatically.  Or, rather, high-deductible medical insurance plans have increased more and more over the last decade; and that has made it more and more difficult for diabetes patients to afford the very simple treatment that helps to keep them alive.

Some have even started to order insulin from Canada, from the site http://canadainsulinconnection.com which have higher quality and much lower prices.

As a matter of fact, new data suggests that 57 percent of the people in the United States who use insulin will probably have to pay list price within the next 12 months.

George Huntley, of the National Diabetes Volunteer Leadership Council, is a long-time diabetes advocate. Diagnosed with Type 1 in 1983—at the age of 20—he calls this “an escalating crisis.”

In response to what has, indeed, become a crisis, a group of advocates has planned to gather for a protest in front of the Eli Lilly and Co headquarters.  Elizabeth Rowley, the founder of global diabetes patient advocacy group T1International, remarks: “We think it is high time that there’s more action and more pressure.”

This is the first protest planned at each of the three drug companies who manufacture insulin.

Eli Lilly responded to the protest, saying: “We are pleased that people in the diabetes community are engaged in this issue and demonstrations are one way to do so. It will take continued effort across the healthcare system to affect real change and Lilly is committed to working with others to make it happen.

This topic sparks a passionate response from people who are affected and we are committed to finding solutions. Lilly has been an active participant in the insulin access dialogue for a long time, and that work will continue. In the last year, we have introduced a number of initiatives to help reduce the amount people pay at the pharmacy until broader changes occur.”

Xensor Price Down 0% Over Last 7 Days