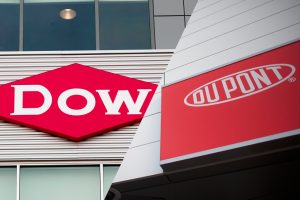 On Friday, DuPont relayed its plan to buy a unit of FMC Corp and will sell its crop protection business in order to win approval from the European Union over its pending merger with Dow Chemical. On this announcement, shares of FMC rose upwards of 17 percent, hitting a near three-year high of $72.00. On the other hand, shares of DuPont slid, by a slight by 1.5 percent) with Dow’s shares also fell, marginally.

Buying nearly all of FMC’s health and nutrition business should fetch DuPont approximately $1.6 billion, when you consider comparable asset valuation.

Now, the European Union, of course, has been long concerned with the $130 billion merger of two of the oldest and biggest US chemical producers. This merger would, of course, leave very few incentives for companies to produce any new herbicides and pesticides down the road. Of course, the Dow-DuPont merger is also still awaiting approval in the US, as well as Australia, Brazil, Canada, and China, but the companies express there is far less concern over anti-competitive results in these regions.

According to DuPont CEO Edward Breen, “We are far down the road in our conversations with the other regulators,” adding only that the European Commission’s conditional approval is a “big hurdle to get over.”

It is also important to note that this deal is only of of three mega mergers in this industry. The three deals, if all are successful, will reduce the field from six major competitors to only three. The other two deals are between ChemChina bidding $43 billion for Syngenta and Bayer scooping up seed producer Monsanto.

Again, DuPont will receive a $1.6 billion consideration as part of the deal, and this includes upwards of $1.2 billion in cash with another $425 million in working capital.

“This revised agreement was necessary and a very positive outcome driven by the transaction with FM,” explains Dow Chief Executive Officer Andrew Liveris. “It is another significant milestone in our progress to complete this value-creating transaction and the subsequent intended spins as swiftly as possible and without any change to the committed synergies.”