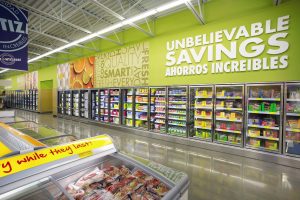 A supermarket battle that has gone on for over a decade in Europe has moved across the Atlantic to the U.S. adding more competitive pressure to an industry that already is embroiled in a price war of deflating prices.

Aldi is known for its low prices for private-label products, and is planning to spend as much as $3.4 billion during the upcoming five years that will result in opening 900 supermarkets, said the company on Monday.

This investment comes as its discount rival in Europe Lidl, prepares for the opening of its first stores in the U.S. this week, with its own plans of opening 100 before the summer of next year.

The expansion in the U.S. by the private-label giants from based in Germany could put even more pressure on the conventional retailers in the U.S. such as Kroger and Walmart to lower prices.

The latest competition in the industry, which is notoriously low margin, arrives at a time of deflationary spiraling that has seen prices of food drop 17 consecutive months, which is the longest streak of its kinds in over 60 years.

The addition of Aldi and Lidl into the marketplace will cause a big disruption for traditional grocers in the U.S. as they cannot afford to lose any sales at present because of how competitive the industry has become, said on Wall Street analyst.

Analysts predict that sales in the “deep discount sector” of the U.S. grocery business, which includes Lidl and Aldi, will increase as much as 10% yearly through 2020, which is five times higher than traditional stores.

On Thursday, the rivalry will intensify between the two grocers when Lidl opens its first nine stores across three states. Analysts estimate that it could open as many as 600 locations in the U.S. during the upcoming five years.

Kroger and Albertsons, which owns Safeway, are No. 1 and 2 respectively.

Aldi added more to its produce department and increased its gluten-free and organic offerings the past few years trying to appeal to shoppers who are more mainstream.

The company also has started to offer fresh fish, a better selection of meats and an increase of national brands, which is a bid to shed the label of being only a discounter.