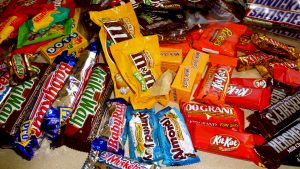 Would you wait 25 for seconds for a candy bar? Apparently, when presented with choice versus immediate access to a healthier snack, more people would surprisingly choose the latter. Dr. Brad Appelhans, of the Rush University Medical center has designed a vending machine which examines precisely this behavior.

Consider it, essentially, a “time tax,” Appelhans explains. The idea somewhat embraces the idea the longer you have to wait for something, the less desirable it becomes, particularly when presented with another—albeit perhaps less desirable—option. Supposedly this idea is similar to the one which suggests that having to spend more money on sugary beverages will make you buy less of them. \

He comments, “We were interested in the ability to test whether time delays can nudge people to healthier choices.” And with that, then, he created the DISC study (Delays to Influence Snack Choice). He inserted this software into a vending machine which catches snacks falling from their shelf with the display advising that the customer will have to wait an additional 25 seconds for “less-healthy” snacks.

Appelhans explains that whenever they implemented this delay, “we saw a roughly 5 percent change in the proportion of healthy snacks [sales].” Furthermore, this is also the same approximate increase in sales they noticed when they lowered the price of healthier snacks by only 25 cents. Now, the effect was not a major one, he says, but “if you are to extrapolate this out across 1 million vending machines and over time, it could add up to something meaningful.”

He further details: “Unlike the discount, the delays didn’t harm the overall revenues of the machine. Places want people to have more nutrition, but they don’t want to lose revenue. So the time delay might be a nice way to have it both ways.”

It seems, too, that simply raising the price of the unhealthy foods is not the answer; at least, some of the time. Cornell University economist David Just, who was not part of the study, tells, “There are a lot of problems with trying to use taxes or subsidies.”