Appian Co. (NASDAQ:APPN – Get Rating) major shareholder Abdiel Capital Advisors, Lp purchased 38,000 shares of the business’s stock in a transaction dated Monday, January 23rd. The shares were purchased at an average cost of $39.95 per share, with a total value of $1,518,100.00. Following the completion of the purchase, the insider now directly owns 9,598,028 shares in the company, valued at $383,441,218.60. The acquisition was disclosed in a document filed with the Securities & Exchange Commission, which is available at this hyperlink. Large shareholders that own at least 10% of a company’s shares are required to disclose their transactions with the SEC.

Appian (NASDAQ:APPN – Get Rating) last released its earnings results on Thursday, November 3rd. The company reported ($0.59) earnings per share (EPS) for the quarter, missing analysts’ consensus estimates of ($0.32) by ($0.27). The business had revenue of $117.88 million during the quarter, compared to analyst estimates of $116.11 million. Appian had a negative net margin of 31.83% and a negative return on equity of 53.25%. The business’s quarterly revenue was up 27.5% compared to the same quarter last year. During the same period last year, the business earned ($0.29) EPS. Research analysts forecast that Appian Co. will post -1.86 earnings per share for the current year.

Appian Corporation provides low-code automation platform in the United States and internationally. The company's platform automates the creation of forms, workflows, data structures, reports, user interfaces, and other software elements that are needed to be manually coded. The company also offers professional and customer support services. 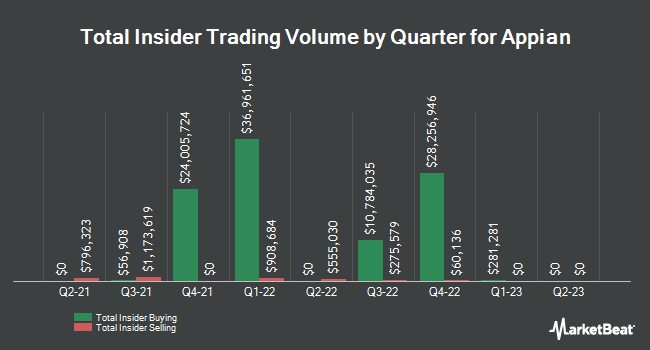 Receive News & Ratings for Appian Daily - Enter your email address below to receive a concise daily summary of the latest news and analysts' ratings for Appian and related companies with MarketBeat.com's FREE daily email newsletter.

Complete the form below to receive the latest headlines and analysts' recommendations for Appian with our free daily email newsletter: