Shares of Janus Henderson Group plc (NYSE:JHG – Get Rating) have earned an average recommendation of “Hold” from the eight ratings firms that are covering the stock, MarketBeat reports. Four investment analysts have rated the stock with a sell rating and four have issued a hold rating on the company. The average 1 year target price among analysts that have issued ratings on the stock in the last year is $21.82.

In other news, insider Georgina Fogo sold 10,701 shares of the company’s stock in a transaction dated Friday, July 1st. The stock was sold at an average price of $23.29, for a total value of $249,226.29. Following the completion of the transaction, the insider now owns 101,862 shares of the company’s stock, valued at $2,372,365.98. The transaction was disclosed in a filing with the SEC, which is accessible through this hyperlink. 18.10% of the stock is owned by company insiders.

Janus Henderson Group (NYSE:JHG – Get Rating) last issued its earnings results on Thursday, July 28th. The company reported $0.63 earnings per share (EPS) for the quarter, missing the consensus estimate of $0.65 by ($0.02). The business had revenue of $555.50 million during the quarter, compared to the consensus estimate of $550.18 million. Janus Henderson Group had a net margin of 19.39% and a return on equity of 13.13%. The firm’s revenue for the quarter was down 24.8% compared to the same quarter last year. During the same period last year, the business posted $1.16 EPS. As a group, research analysts forecast that Janus Henderson Group will post 2.45 EPS for the current fiscal year.

The firm also recently declared a quarterly dividend, which was paid on Wednesday, August 24th. Stockholders of record on Monday, August 8th were paid a $0.39 dividend. This represents a $1.56 annualized dividend and a dividend yield of 6.95%. The ex-dividend date was Friday, August 5th. Janus Henderson Group’s dividend payout ratio is currently 52.88%. 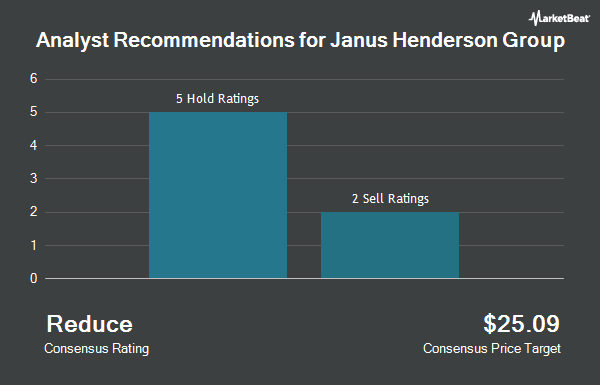 Complete the form below to receive the latest headlines and analysts' recommendations for Janus Henderson Group with our free daily email newsletter: