Marathon Petroleum (NYSE:MPC – Get Rating) had its price objective upped by Cowen to $129.00 in a research report released on Tuesday morning, Stock Target Advisor reports.

The firm also recently announced a quarterly dividend, which was paid on Monday, September 12th. Investors of record on Wednesday, August 17th were paid a dividend of $0.58 per share. The ex-dividend date of this dividend was Tuesday, August 16th. This represents a $2.32 annualized dividend and a yield of 2.42%. Marathon Petroleum’s dividend payout ratio (DPR) is 15.68%.

Marathon Petroleum Corporation, together with its subsidiaries, operates as an integrated downstream energy company primarily in the United States. It operates in two segments, Refining & Marketing, and Midstream. The Refining & Marketing segment refines crude oil and other feedstocks at its refineries in the Gulf Coast, Mid-Continent, and West Coast regions of the United States; and purchases refined products and ethanol for resale. 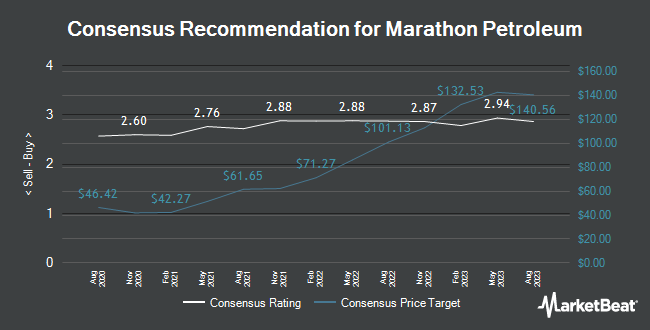 Complete the form below to receive the latest headlines and analysts' recommendations for Marathon Petroleum with our free daily email newsletter: