Star Bulk Carriers (NASDAQ:SBLK – Get Rating) posted its quarterly earnings data on Thursday. The shipping company reported $2.00 EPS for the quarter, beating analysts’ consensus estimates of $1.75 by $0.25, Fidelity Earnings reports. Star Bulk Carriers had a net margin of 52.61% and a return on equity of 43.74%. During the same quarter in the prior year, the company posted $1.26 earnings per share.

The firm also recently announced a quarterly dividend, which will be paid on Thursday, September 8th. Investors of record on Thursday, August 25th will be given a dividend of $1.65 per share. This represents a $6.60 dividend on an annualized basis and a yield of 25.80%. The ex-dividend date is Wednesday, August 24th. Star Bulk Carriers’s dividend payout ratio (DPR) is presently 75.86%.

Star Bulk Carriers Corp., a shipping company, engages in the ocean transportation of dry bulk cargoes worldwide. The company's vessels transport a range of major bulks, including iron ores, coal, and grains, as well as minor bulks, such as bauxite, fertilizers, and steel products. As of December 31, 2021, it had a fleet of 128 vessels with an aggregate capacity of approximately 14.1 million deadweight tons, including 17 Newcastlemax, 24 Capesize, 7 Post Panamax, 41 Kamsarmax, 2 Panamax, 20 Ultramax, and 17 Supramax vessels. 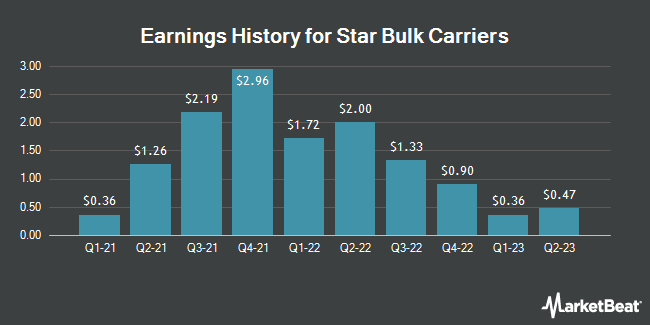 Post Price Target Increased to $100.00 by Analysts at Stifel Nicolaus

Tripadvisor Upgraded to Buy at StockNews.com

Complete the form below to receive the latest headlines and analysts' recommendations for Star Bulk Carriers with our free daily email newsletter: