BTIG Research downgraded shares of Snowflake (NYSE:SNOW – Get Rating) from a buy rating to a neutral rating in a research note published on Tuesday, Marketbeat Ratings reports.

Snowflake (NYSE:SNOW – Get Rating) last posted its earnings results on Wednesday, May 25th. The company reported ($0.52) earnings per share (EPS) for the quarter, missing the consensus estimate of ($0.39) by ($0.13). The business had revenue of $422.37 million during the quarter, compared to the consensus estimate of $413.01 million. Snowflake had a negative return on equity of 12.39% and a negative net margin of 45.48%. The firm’s revenue for the quarter was up 84.5% compared to the same quarter last year. During the same period in the previous year, the business earned ($0.69) earnings per share. On average, equities analysts expect that Snowflake will post -2.1 earnings per share for the current fiscal year.

Institutional Investors Weigh In On Snowflake

Snowflake Inc provides a cloud-based data platform in the United States and internationally. The company's platform offers Data Cloud, which enables customers to consolidate data into a single source of truth to drive meaningful business insights, build data-driven applications, and share data. Its platform is used by various organizations of sizes in a range of industries. 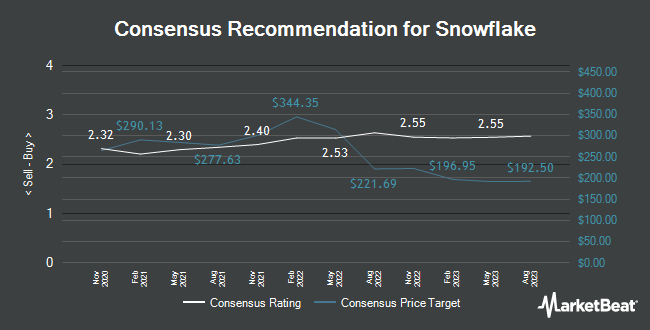 Complete the form below to receive the latest headlines and analysts' recommendations for Snowflake with our free daily email newsletter: