$0.40 Earnings Per Share Expected for Safehold Inc. (NYSE:SAFE) This Quarter

Equities analysts expect Safehold Inc. (NYSE:SAFE – Get Rating) to announce earnings per share (EPS) of $0.40 for the current fiscal quarter, according to Zacks. Five analysts have made estimates for Safehold’s earnings, with the lowest EPS estimate coming in at $0.38 and the highest estimate coming in at $0.43. Safehold reported earnings of $0.28 per share in the same quarter last year, which would indicate a positive year-over-year growth rate of 42.9%. The firm is scheduled to issue its next earnings report on Monday, January 1st.

According to Zacks, analysts expect that Safehold will report full-year earnings of $1.70 per share for the current financial year, with EPS estimates ranging from $1.61 to $1.76. For the next year, analysts expect that the business will post earnings of $1.86 per share, with EPS estimates ranging from $1.73 to $2.04. Zacks Investment Research’s EPS calculations are a mean average based on a survey of research analysts that cover Safehold.

Safehold (NYSE:SAFE – Get Rating) last released its quarterly earnings data on Thursday, April 21st. The company reported $0.43 earnings per share (EPS) for the quarter, beating analysts’ consensus estimates of $0.42 by $0.01. The firm had revenue of $60.40 million for the quarter, compared to analysts’ expectations of $59.38 million. Safehold had a net margin of 39.77% and a return on equity of 4.78%. The company’s revenue for the quarter was up 38.9% compared to the same quarter last year. During the same quarter in the previous year, the company earned $0.32 earnings per share.

In other news, major shareholder Istar Inc. bought 3,240,000 shares of the firm’s stock in a transaction on Monday, March 7th. The stock was acquired at an average cost of $59.00 per share, with a total value of $191,160,000.00. The transaction was disclosed in a legal filing with the Securities & Exchange Commission, which is accessible through this hyperlink. Insiders own 0.56% of the company’s stock.

The firm also recently disclosed a quarterly dividend, which was paid on Friday, April 15th. Investors of record on Thursday, March 31st were paid a dividend of $0.17 per share. This represents a $0.68 annualized dividend and a yield of 1.49%. The ex-dividend date of this dividend was Wednesday, March 30th. Safehold’s payout ratio is currently 46.26%.

About Safehold (Get Rating)

Safehold Inc (NYSE: SAFE) is revolutionizing real estate ownership by providing a new and better way for owners to unlock the value of the land beneath their buildings. Through its modern ground lease capital solution, Safehold helps owners of high quality multifamily, office, industrial, hospitality and mixed-use properties in major markets throughout the United States generate higher returns with less risk. 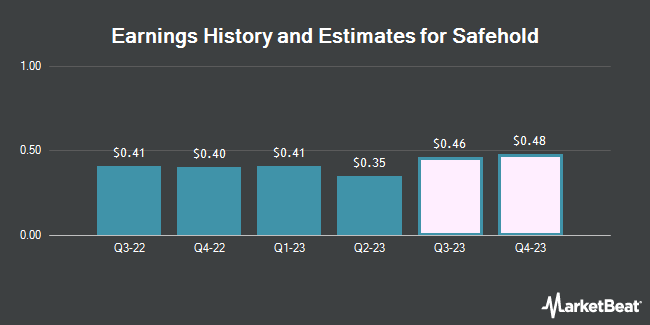 Receive News & Ratings for Safehold Daily - Enter your email address below to receive a concise daily summary of the latest news and analysts' ratings for Safehold and related companies with MarketBeat.com's FREE daily email newsletter.

Complete the form below to receive the latest headlines and analysts' recommendations for Safehold with our free daily email newsletter: