Equities analysts forecast that Denali Therapeutics Inc. (NASDAQ:DNLI – Get Rating) will announce sales of $37.55 million for the current fiscal quarter, according to Zacks. Eight analysts have provided estimates for Denali Therapeutics’ earnings. The lowest sales estimate is $9.73 million and the highest is $64.00 million. Denali Therapeutics posted sales of $22.94 million in the same quarter last year, which would indicate a positive year-over-year growth rate of 63.7%. The business is expected to announce its next earnings report on Monday, January 1st.

According to Zacks, analysts expect that Denali Therapeutics will report full year sales of $103.55 million for the current fiscal year, with estimates ranging from $71.34 million to $154.10 million. For the next year, analysts forecast that the business will post sales of $146.92 million, with estimates ranging from $72.05 million to $358.85 million. Zacks’ sales calculations are an average based on a survey of sell-side research analysts that follow Denali Therapeutics.

Denali Therapeutics (NASDAQ:DNLI – Get Rating) last released its quarterly earnings data on Thursday, May 5th. The company reported ($0.53) earnings per share (EPS) for the quarter, missing the consensus estimate of ($0.47) by ($0.06). Denali Therapeutics had a negative return on equity of 28.13% and a negative net margin of 344.79%. The business had revenue of $42.10 million during the quarter, compared to analyst estimates of $33.32 million. During the same period in the previous year, the company earned ($0.58) EPS. Denali Therapeutics’s revenue was up 432.9% on a year-over-year basis.

In other Denali Therapeutics news, Director Marc Tessier-Lavigne sold 20,000 shares of the stock in a transaction on Wednesday, March 23rd. The shares were sold at an average price of $33.83, for a total transaction of $676,600.00. The transaction was disclosed in a filing with the SEC, which can be accessed through the SEC website. Corporate insiders own 17.00% of the company’s stock.

About Denali Therapeutics (Get Rating)

Denali Therapeutics Inc, a biopharmaceutical company, discovers and develops therapeutic candidates for neurodegenerative diseases in the United States. It offers leucine-rich repeat kinase 2 (LRRK2) inhibitor product candidate, including BIIB122/DNL151, a small molecule inhibitor, which is in phase I and phase Ib clinical trials for the treatment of Parkinson's disease. 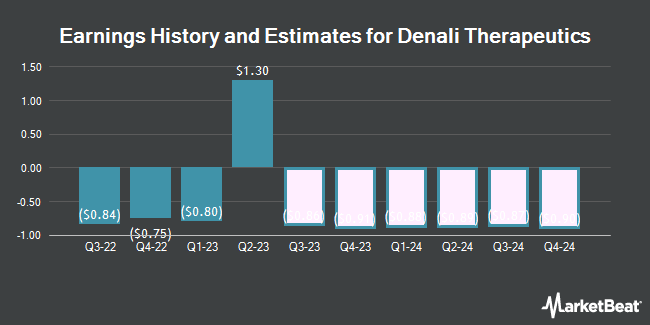 VSE Downgraded to Sector Perform at Royal Bank of Canada

Autodesk Price Target Cut to $250.00 by Analysts at Mizuho

Complete the form below to receive the latest headlines and analysts' recommendations for Denali Therapeutics with our free daily email newsletter: