Marinus Pharmaceuticals, Inc. (NASDAQ:MRNS – Get Rating) has been given an average rating of “Buy” by the eight analysts that are covering the stock, MarketBeat Ratings reports. One analyst has rated the stock with a sell rating, one has assigned a hold rating and five have assigned a buy rating to the company. The average 1-year price objective among analysts that have issued a report on the stock in the last year is $32.83.

Marinus Pharmaceuticals, Inc, a pharmaceutical company, focuses on development and commercialization of products for patients suffering from rare genetic epilepsies and other seizure disorders. It offers ZTALMY, an oral suspension for the treatment of seizures associated with cyclin-dependent kinase-like 5 deficiency disorder for adult and pediatric patient populations in acute and chronic care, and in-patient and self-administered settings. 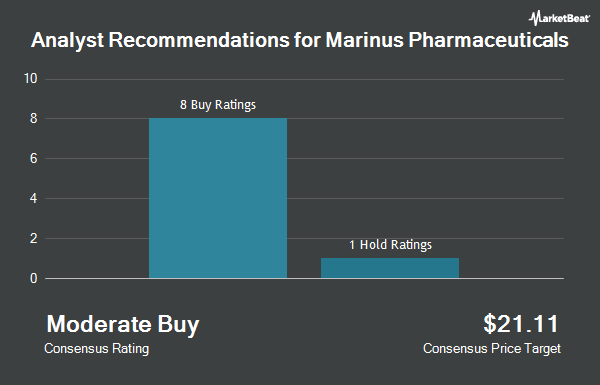 Complete the form below to receive the latest headlines and analysts' recommendations for Marinus Pharmaceuticals with our free daily email newsletter: