Wall Street analysts expect that Crown Holdings, Inc. (NYSE:CCK – Get Rating) will report sales of $3.32 billion for the current quarter, according to Zacks Investment Research. Six analysts have provided estimates for Crown’s earnings, with the lowest sales estimate coming in at $3.07 billion and the highest estimate coming in at $3.45 billion. Crown posted sales of $2.86 billion in the same quarter last year, which would indicate a positive year over year growth rate of 16.1%. The company is expected to announce its next quarterly earnings report on Monday, January 1st.

Crown (NYSE:CCK – Get Rating) last released its earnings results on Monday, April 25th. The industrial products company reported $2.01 earnings per share for the quarter, topping analysts’ consensus estimates of $1.82 by $0.19. The firm had revenue of $3.16 billion for the quarter, compared to the consensus estimate of $2.94 billion. Crown had a negative net margin of 4.63% and a positive return on equity of 39.60%. The company’s revenue was up 23.3% compared to the same quarter last year. During the same period in the prior year, the firm earned $1.83 EPS.

Crown Holdings, Inc designs, manufactures, and sells packaging products and equipment for consumer goods and industrial products in the Americas, Europe, and the Asia Pacific. It offers products for consumer goods, including steel and aluminum cans for food and beverage industries. The company also provides products for industrial products, such as steel and plastic strap consumables and equipment, paper-based protective packaging, and plastic film consumables and equipment to metals, food and beverage, construction, agricultural, corrugated, and general industries. 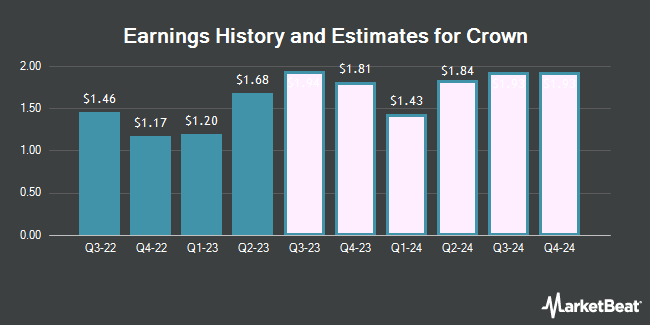 Receive News & Ratings for Crown Daily - Enter your email address below to receive a concise daily summary of the latest news and analysts' ratings for Crown and related companies with MarketBeat.com's FREE daily email newsletter.

Complete the form below to receive the latest headlines and analysts' recommendations for Crown with our free daily email newsletter: