Bank of Nova Scotia (NYSE:BNS) (TSE:BNS) last posted its quarterly earnings data on Monday, August 23rd. The bank reported $2.01 earnings per share for the quarter, topping the Thomson Reuters’ consensus estimate of $1.50 by $0.51. Bank of Nova Scotia had a net margin of 22.86% and a return on equity of 13.87%. The business had revenue of $7.76 billion during the quarter, compared to analysts’ expectations of $7.77 billion. During the same quarter in the prior year, the business posted $1.04 earnings per share. Bank of Nova Scotia’s revenue was up .3% compared to the same quarter last year.

About Bank of Nova Scotia

The Bank of Nova Scotia engages in the provision of financial products and services, including personal, commercial, corporate, and investment banking. It operates through the following segments: Canadian Banking, International Banking, Global Banking and Markets, and Other. The Other segment includes group treasury, smaller operating segments and business line elimination items. 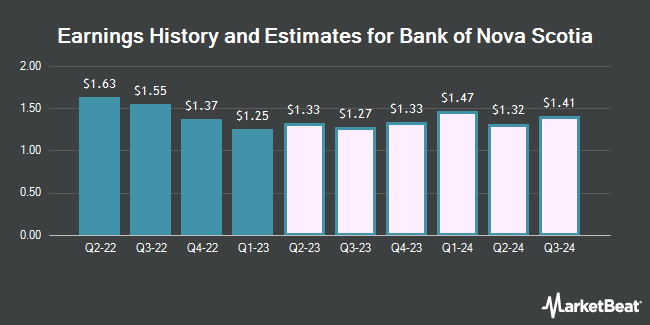 Verra Mobility Upgraded to “B” at TheStreet

Complete the form below to receive the latest headlines and analysts' recommendations for Bank of Nova Scotia with our free daily email newsletter: