Tourmaline Oil (TSE:TOU) had its price target raised by stock analysts at Scotiabank from C$59.00 to C$76.00 in a report released on Thursday, BayStreet.CA reports. Scotiabank’s price objective points to a potential upside of 69.57% from the company’s previous close.

Tourmaline Oil (TSE:TOU) last posted its earnings results on Wednesday, July 28th. The company reported C$0.33 earnings per share (EPS) for the quarter, missing analysts’ consensus estimates of C$0.73 by C($0.40). The company had revenue of C$723.27 million during the quarter. Research analysts predict that Tourmaline Oil will post 4.4200002 earnings per share for the current fiscal year.

Tourmaline Oil Corp. acquires, explores for, develops, and produces oil and natural gas properties in the Western Canadian Sedimentary Basin. It holds interests in properties located in the Alberta Deep Basin, Northeast British Columbia Montney, and the Peace River High Triassic oil complex. The company was incorporated in 2008 and is headquartered in Calgary, Canada.

Read More: Is it better to buy a fund with a higher or lower NAV? 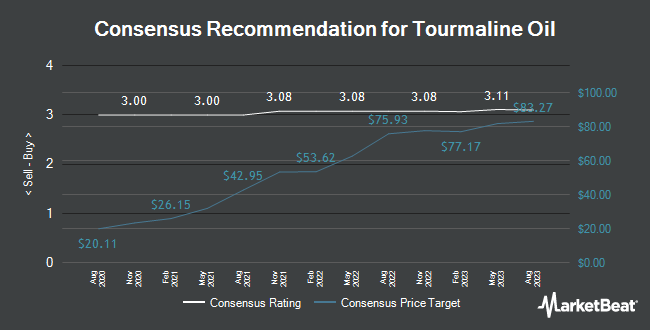 $1.33 Billion in Sales Expected for Logitech International S.A. This Quarter

Complete the form below to receive the latest headlines and analysts' recommendations for Tourmaline Oil with our free daily email newsletter: