Altium Capital Management LP grew its holdings in Celldex Therapeutics, Inc. (NASDAQ:CLDX) by 106.9% during the 2nd quarter, according to the company in its most recent disclosure with the SEC. The fund owned 93,116 shares of the biopharmaceutical company’s stock after purchasing an additional 48,103 shares during the quarter. Altium Capital Management LP owned about 0.20% of Celldex Therapeutics worth $3,114,000 as of its most recent filing with the SEC.

Celldex Therapeutics (NASDAQ:CLDX) last issued its quarterly earnings results on Thursday, August 5th. The biopharmaceutical company reported ($0.34) earnings per share for the quarter, beating analysts’ consensus estimates of ($0.40) by $0.06. The business had revenue of $3.48 million during the quarter, compared to analyst estimates of $1.13 million. Celldex Therapeutics had a negative net margin of 766.16% and a negative return on equity of 26.76%. Equities research analysts expect that Celldex Therapeutics, Inc. will post -1.5 earnings per share for the current year.

In other Celldex Therapeutics news, CFO Samuel Bates Martin sold 2,738 shares of Celldex Therapeutics stock in a transaction on Tuesday, August 10th. The shares were sold at an average price of $45.25, for a total transaction of $123,894.50. The transaction was disclosed in a document filed with the Securities & Exchange Commission, which is accessible through this link. Company insiders own 1.90% of the company’s stock.

Celldex Therapeutics, Inc engages in the business of development, manufacturing and commercialization of novel therapeutics for human health care. Its drug candidates have the ability to engage the human immune system and directly inhibit tumors to treat specific types of cancer and other diseases. Its pipeline includes Varlilumab, CDX-1140, and CDX-301, and CDX-3379.

See Also: What is intrinsic value? 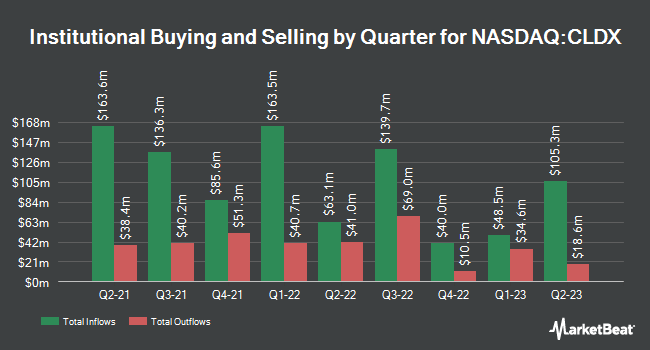 Complete the form below to receive the latest headlines and analysts' recommendations for Celldex Therapeutics with our free daily email newsletter: