Connors Investor Services Inc. bought a new stake in PaySign, Inc. (NASDAQ:PAYS) in the 2nd quarter, according to its most recent Form 13F filing with the Securities and Exchange Commission (SEC). The firm bought 58,300 shares of the company’s stock, valued at approximately $185,000. Connors Investor Services Inc. owned approximately 0.11% of PaySign at the end of the most recent quarter.

PaySign (NASDAQ:PAYS) last posted its earnings results on Tuesday, August 10th. The company reported ($0.02) earnings per share for the quarter, missing the Zacks’ consensus estimate of ($0.01) by ($0.01). The firm had revenue of $6.65 million during the quarter. As a group, sell-side analysts expect that PaySign, Inc. will post 0.04 EPS for the current year.

PaySign, Inc engages in the provision of prepaid card programs and processing services for corporate, consumer and government applications. It specializes in corporate incentive products, payroll cards, general purpose re-loadable cards, and travel cards. It markets its prepaid solutions through its PaySign brand.

Read More: Is it better to buy a fund with a higher or lower NAV?

Want to see what other hedge funds are holding PAYS? Visit HoldingsChannel.com to get the latest 13F filings and insider trades for PaySign, Inc. (NASDAQ:PAYS). 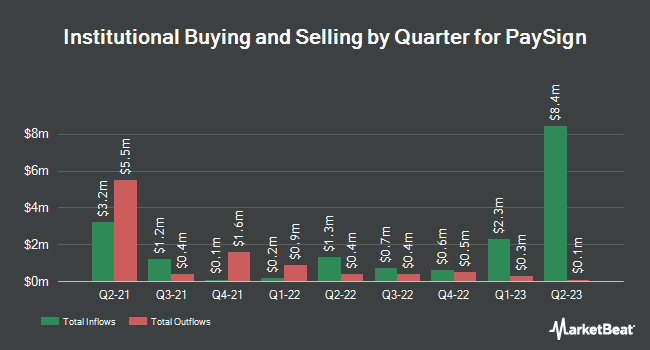 Receive News & Ratings for PaySign Daily - Enter your email address below to receive a concise daily summary of the latest news and analysts' ratings for PaySign and related companies with MarketBeat.com's FREE daily email newsletter.

$2.24 Earnings Per Share Expected for Lowe’s Companies, Inc. This Quarter

Brokerages Expect Deere & Company Will Announce Earnings of $4.02 Per Share

Complete the form below to receive the latest headlines and analysts' recommendations for PaySign with our free daily email newsletter: