Complete the form below to receive the latest headlines and analysts' recommendations for Schneider National with our free daily email newsletter:

Schneider National (NYSE:SNDR)‘s stock had its “buy” rating reaffirmed by research analysts at Robert W. Baird in a research note issued on Monday, Price Targets.com reports. They presently have a $28.00 price target on the stock. Robert W. Baird’s price objective indicates a potential upside of 10.54% from the stock’s current price.

Schneider National (NYSE:SNDR) last issued its earnings results on Thursday, April 29th. The company reported $0.31 earnings per share for the quarter, beating the Zacks’ consensus estimate of $0.29 by $0.02. The firm had revenue of $1.23 billion for the quarter, compared to the consensus estimate of $1.19 billion. Schneider National had a return on equity of 9.18% and a net margin of 4.29%. The company’s revenue was up 9.8% compared to the same quarter last year. During the same quarter last year, the business posted $0.24 EPS. On average, sell-side analysts anticipate that Schneider National will post 1.2 EPS for the current fiscal year. 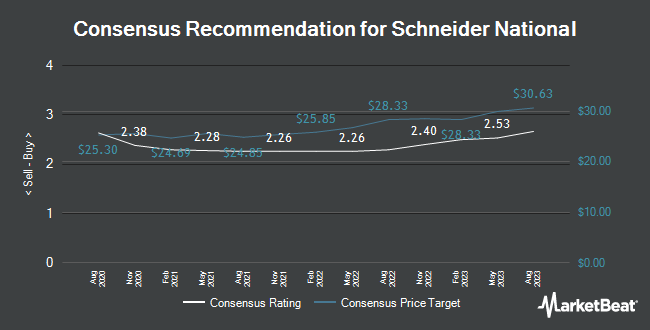