Complete the form below to receive the latest headlines and analysts' recommendations for Molson Coors Beverage with our free daily email newsletter:

Molson Coors Beverage (NYSE:TAP) had its price target lifted by Morgan Stanley from $49.00 to $53.00 in a report issued on Monday, PriceTargets.com reports. The brokerage presently has an “equal weight” rating on the stock. Morgan Stanley’s target price would suggest a potential downside of 6.06% from the stock’s previous close.

Molson Coors Beverage Co is a holding company, which engages in the production and sale of beer. It operates through the following segments: North America and Europe. The North America segment operates in the U.S., Canada and various countries in the Caribbean, Latin, and South America. The Europe segment operates in Bulgaria, Croatia, Czech Republic, Hungary, Montenegro, the Republic of Ireland, Romania, Serbia, the U.K., various other European countries, and certain countries within the Middle East, Africa, and Asia Pacific. 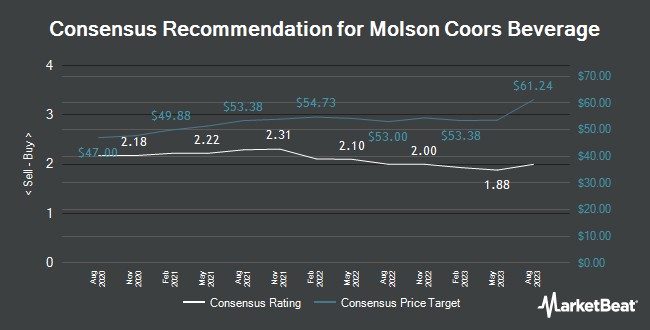