Complete the form below to receive the latest headlines and analysts' recommendations for Suncor Energy with our free daily email newsletter:

Shares of Suncor Energy Inc. (NYSE:SU) (TSE:SU) have earned an average rating of “Buy” from the sixteen brokerages that are currently covering the stock, Marketbeat.com reports. One research analyst has rated the stock with a sell rating, three have assigned a hold rating and eleven have issued a buy rating on the company. The average 12-month target price among brokers that have issued ratings on the stock in the last year is $29.00.

Suncor Energy (NYSE:SU) (TSE:SU) last posted its quarterly earnings results on Tuesday, February 2nd. The oil and gas producer reported ($0.09) EPS for the quarter, topping the consensus estimate of ($0.11) by $0.02. The business had revenue of $5.06 billion during the quarter, compared to analysts’ expectations of $6.71 billion. Suncor Energy had a negative net margin of 23.13% and a negative return on equity of 1.71%. During the same period last year, the company posted $0.51 earnings per share. On average, equities analysts forecast that Suncor Energy will post -1.21 earnings per share for the current fiscal year.

The business also recently announced a quarterly dividend, which was paid on Thursday, March 25th. Investors of record on Thursday, March 4th were given a dividend of $0.1642 per share. The ex-dividend date of this dividend was Wednesday, March 3rd. This represents a $0.66 dividend on an annualized basis and a yield of 3.15%. This is a positive change from Suncor Energy’s previous quarterly dividend of $0.16. Suncor Energy’s payout ratio is 30.66%.

Read More: What is a Fibonacci Channel? 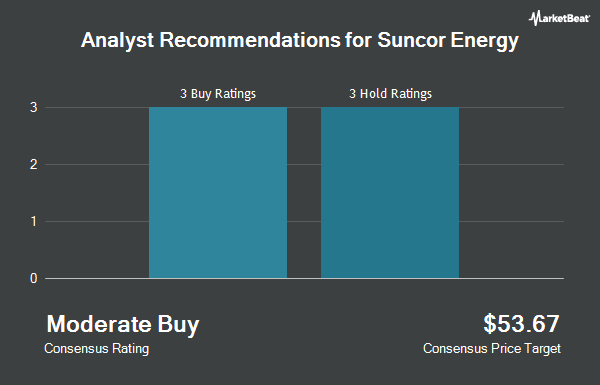