Complete the form below to receive the latest headlines and analysts' recommendations for Bonanza Creek Energy with our free daily email newsletter:

Analysts predict that Bonanza Creek Energy, Inc. (NYSE:BCEI) will announce $66.93 million in sales for the current quarter, according to Zacks. Four analysts have issued estimates for Bonanza Creek Energy’s earnings. The highest sales estimate is $72.00 million and the lowest is $62.90 million. Bonanza Creek Energy posted sales of $60.41 million during the same quarter last year, which would indicate a positive year-over-year growth rate of 10.8%. The business is scheduled to announce its next quarterly earnings report on Thursday, May 6th.

According to Zacks, analysts expect that Bonanza Creek Energy will report full year sales of $477.20 million for the current financial year, with estimates ranging from $430.20 million to $514.00 million. For the next fiscal year, analysts anticipate that the company will report sales of $546.70 million, with estimates ranging from $525.90 million to $574.00 million. Zacks Investment Research’s sales averages are an average based on a survey of sell-side research analysts that follow Bonanza Creek Energy.

Bonanza Creek Energy (NYSE:BCEI) last announced its quarterly earnings results on Thursday, February 18th. The oil and gas producer reported $3.89 earnings per share (EPS) for the quarter, beating the consensus estimate of $0.87 by $3.02. Bonanza Creek Energy had a net margin of 17.03% and a return on equity of 4.09%. The company had revenue of $62.64 million for the quarter, compared to analyst estimates of $66.38 million.

A number of research firms have weighed in on BCEI. Zacks Investment Research lowered shares of Bonanza Creek Energy from a “buy” rating to a “sell” rating in a report on Wednesday, March 17th. KeyCorp boosted their target price on shares of Bonanza Creek Energy from $39.00 to $40.00 and gave the stock an “overweight” rating in a report on Tuesday. One analyst has rated the stock with a sell rating, one has given a hold rating and five have given a buy rating to the company’s stock. The stock has an average rating of “Buy” and an average price target of $27.63.

Bonanza Creek Energy, Inc, an oil and natural gas company, engages in the acquisition, exploration, development, and production of oil and related liquids-rich natural gas in the United States. Its primary oil and liquids-weighted assets are located in the Wattenberg Field in Colorado. As of December 31, 2020, the company had proved reserves of 118.2 million barrel of oil equivalent.

Recommended Story: How is the S&P 500 index different from the DJIA? 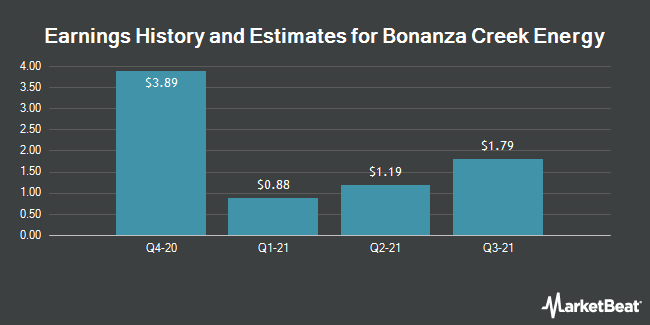