Complete the form below to receive the latest headlines and analysts' recommendations for Orion Engineered Carbons with our free daily email newsletter:

Bowling Portfolio Management LLC acquired a new stake in shares of Orion Engineered Carbons S.A. (NYSE:OEC) during the third quarter, according to its most recent disclosure with the Securities and Exchange Commission (SEC). The firm acquired 20,928 shares of the specialty chemicals company’s stock, valued at approximately $262,000.

In related news, CEO Corning F. Painter acquired 50,000 shares of the stock in a transaction on Friday, September 4th. The stock was acquired at an average cost of $12.70 per share, for a total transaction of $635,000.00. Following the completion of the acquisition, the chief executive officer now directly owns 372,977 shares of the company’s stock, valued at approximately $4,736,807.90. The purchase was disclosed in a filing with the Securities & Exchange Commission, which is available through this link. Company insiders own 1.30% of the company’s stock.

Orion Engineered Carbons (NYSE:OEC) last issued its quarterly earnings data on Tuesday, August 4th. The specialty chemicals company reported ($0.14) EPS for the quarter, missing the Thomson Reuters’ consensus estimate of ($0.12) by ($0.02). Orion Engineered Carbons had a return on equity of 43.99% and a net margin of 3.53%. The company had revenue of $202.60 million during the quarter, compared to analysts’ expectations of $180.02 million. During the same quarter last year, the business earned $0.53 earnings per share. The business’s quarterly revenue was down 49.2% on a year-over-year basis. Analysts expect that Orion Engineered Carbons S.A. will post 0.87 EPS for the current fiscal year. 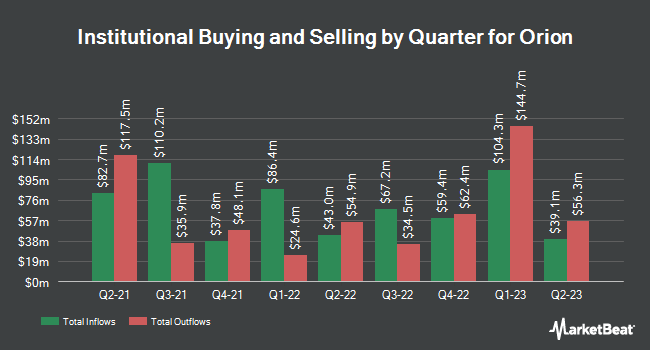