Complete the form below to receive the latest headlines and analysts' recommendations for KB Home with our free daily email newsletter:

KB Home (NYSE:KBH) had its price target raised by stock analysts at Barclays from $42.00 to $45.00 in a note issued to investors on Wednesday, The Fly reports. The brokerage presently has an “overweight” rating on the construction company’s stock. Barclays‘s price target would suggest a potential upside of 16.46% from the stock’s current price.

KB Home (NYSE:KBH) last announced its quarterly earnings results on Tuesday, September 22nd. The construction company reported $0.83 EPS for the quarter, topping the Thomson Reuters’ consensus estimate of $0.50 by $0.33. The company had revenue of $999.01 million during the quarter, compared to analyst estimates of $885.54 million. KB Home had a return on equity of 12.65% and a net margin of 6.43%. The firm’s revenue was down 13.9% on a year-over-year basis. During the same period in the prior year, the firm posted $0.73 earnings per share. Research analysts expect that KB Home will post 2.67 EPS for the current year. 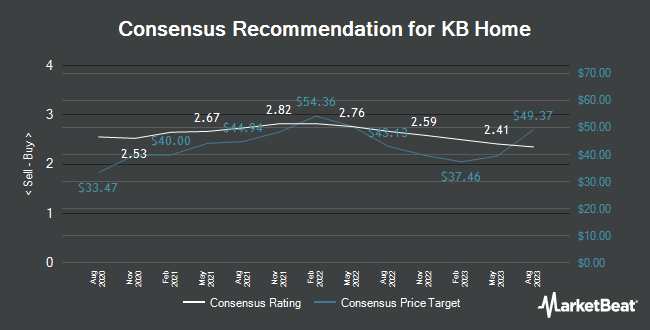