Complete the form below to receive the latest headlines and analysts' recommendations for Associated Banc with our free daily email newsletter:

Associated Banc (NYSE:ASB) last released its quarterly earnings data on Thursday, July 23rd. The bank reported $0.26 earnings per share for the quarter, meeting the consensus estimate of $0.26. The company had revenue of $448.34 million during the quarter, compared to analyst estimates of $323.82 million. Associated Banc had a net margin of 21.70% and a return on equity of 6.88%. On average, analysts anticipate that Associated Banc will post 0.83 EPS for the current fiscal year.

The company also recently disclosed a quarterly dividend, which was paid on Tuesday, September 15th. Investors of record on Tuesday, September 1st were paid a $0.18 dividend. This represents a $0.72 dividend on an annualized basis and a yield of 5.37%. The ex-dividend date was Monday, August 31st. Associated Banc’s dividend payout ratio is currently 36.55%.

In other news, CFO Moral-Niles Christopher Del acquired 2,000 shares of the stock in a transaction that occurred on Monday, August 3rd. The shares were acquired at an average cost of $12.98 per share, for a total transaction of $25,960.00. Following the purchase, the chief financial officer now owns 58,850 shares of the company’s stock, valued at approximately $763,873. The transaction was disclosed in a filing with the Securities & Exchange Commission, which is available through this link. Insiders own 2.38% of the company’s stock.

Featured Article: How to Profit and Limit Losses With Stop Orders 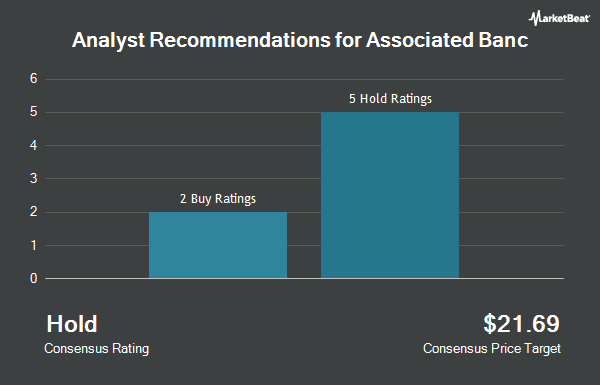