Complete the form below to receive the latest headlines and analysts' recommendations for DENTSPLY SIRONA with our free daily email newsletter:

DENTSPLY SIRONA (NASDAQ:XRAY) was upgraded by stock analysts at BidaskClub from a “sell” rating to a “hold” rating in a research report issued on Tuesday, BidAskClub reports.

DENTSPLY SIRONA (NASDAQ:XRAY) last posted its quarterly earnings results on Thursday, August 6th. The medical instruments supplier reported ($0.18) earnings per share (EPS) for the quarter, missing analysts’ consensus estimates of ($0.02) by ($0.16). DENTSPLY SIRONA had a positive return on equity of 7.13% and a negative net margin of 1.40%. The firm had revenue of $490.60 million for the quarter, compared to the consensus estimate of $492.55 million. During the same period in the previous year, the company posted $0.66 EPS. DENTSPLY SIRONA’s quarterly revenue was down 51.4% compared to the same quarter last year. Research analysts expect that DENTSPLY SIRONA will post 1.1 EPS for the current year.

Further Reading: What is basic economics? 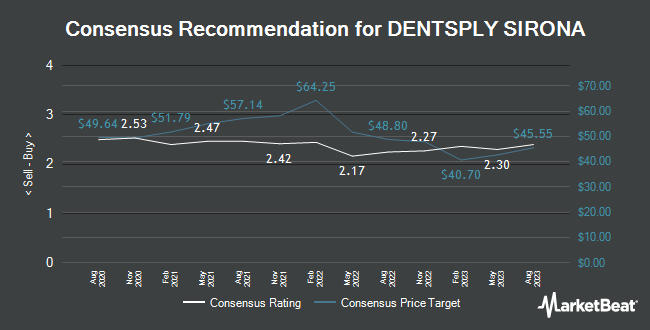