Complete the form below to receive the latest headlines and analysts' recommendations for ACM Research with our free daily email newsletter:

ACM Research Inc (NASDAQ:ACMR) insider Sotheara Cheav sold 5,000 shares of ACM Research stock in a transaction that occurred on Thursday, September 10th. The shares were sold at an average price of $60.75, for a total transaction of $303,750.00. Following the sale, the insider now directly owns 48,334 shares in the company, valued at approximately $2,936,290.50. The transaction was disclosed in a legal filing with the SEC, which is accessible through the SEC website.

ACM Research (NASDAQ:ACMR) last announced its earnings results on Wednesday, August 5th. The specialty retailer reported $0.29 EPS for the quarter, beating analysts’ consensus estimates of $0.19 by $0.10. ACM Research had a net margin of 11.82% and a return on equity of 21.46%. The business had revenue of $39.05 million during the quarter, compared to analysts’ expectations of $30.15 million. On average, research analysts expect that ACM Research Inc will post 0.87 earnings per share for the current year.

Recommended Story: How are the companies in the S&P 500 selected? 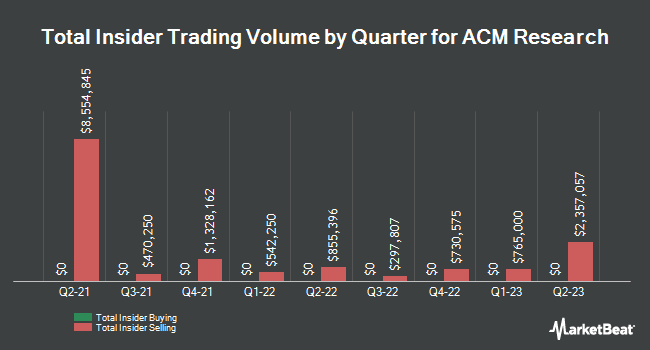