Complete the form below to receive the latest headlines and analysts' recommendations for Xilinx with our free daily email newsletter:

Xilinx (NASDAQ:XLNX) had its target price boosted by equities researchers at Jefferies Financial Group from $115.00 to $130.00 in a research note issued on Friday, The Fly reports. The brokerage currently has a “buy” rating on the programmable devices maker’s stock. Jefferies Financial Group’s price target suggests a potential upside of 21.10% from the company’s current price.

Xilinx (NASDAQ:XLNX) last issued its quarterly earnings data on Thursday, July 30th. The programmable devices maker reported $0.38 earnings per share (EPS) for the quarter, missing the Zacks’ consensus estimate of $0.63 by ($0.25). The company had revenue of $726.67 million for the quarter, compared to the consensus estimate of $727.22 million. Xilinx had a net margin of 21.22% and a return on equity of 29.97%. Analysts predict that Xilinx will post 2.84 earnings per share for the current year.

Featured Article: What are the economic characteristics of a bear market? 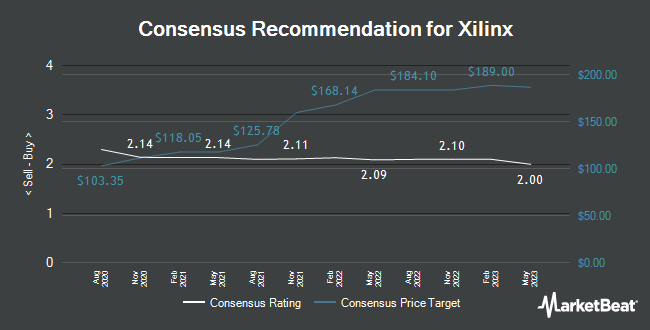 Receive News & Ratings for Xilinx Daily - Enter your email address below to receive a concise daily summary of the latest news and analysts' ratings for Xilinx and related companies with MarketBeat.com's FREE daily email newsletter.