Complete the form below to receive the latest headlines and analysts' recommendations for Casella Waste Systems with our free daily email newsletter:

Casella Waste Systems (NASDAQ:CWST) is scheduled to be announcing its earnings results after the market closes on Monday, August 3rd. Analysts expect the company to announce earnings of $0.06 per share for the quarter. Investors that wish to listen to the company’s conference call can do so using this link.

Casella Waste Systems (NASDAQ:CWST) last released its quarterly earnings data on Thursday, May 7th. The industrial products company reported $0.05 earnings per share (EPS) for the quarter, beating the Zacks’ consensus estimate of ($0.03) by $0.08. Casella Waste Systems had a return on equity of 39.01% and a net margin of 4.50%. The business had revenue of $182.91 million during the quarter, compared to analyst estimates of $180.38 million. During the same quarter in the previous year, the firm posted ($0.01) EPS. The business’s revenue for the quarter was up 11.8% compared to the same quarter last year. On average, analysts expect Casella Waste Systems to post $1 EPS for the current fiscal year and $1 EPS for the next fiscal year.

Casella Waste Systems, Inc, together with its subsidiaries, operates as a vertically integrated solid waste services company in the northeastern United States. The company operates through Eastern, Western, Recycling, and Other segments. It offers resource management services primarily in the areas of solid waste collection and disposal, transfer, recycling, and organics services to residential, commercial, municipal, and industrial customers. 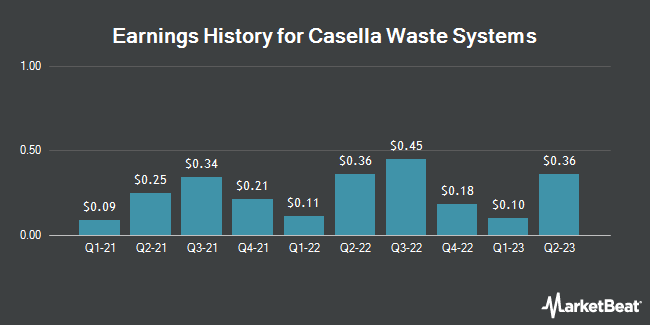