Complete the form below to receive the latest headlines and analysts' recommendations for Dave & Buster's Entertainment with our free daily email newsletter:

Two Sigma Investments LP trimmed its position in Dave & Buster’s Entertainment Inc (NASDAQ:PLAY) by 83.8% in the first quarter, according to its most recent 13F filing with the Securities and Exchange Commission. The fund owned 12,284 shares of the restaurant operator’s stock after selling 63,476 shares during the quarter. Two Sigma Investments LP’s holdings in Dave & Buster’s Entertainment were worth $161,000 as of its most recent filing with the Securities and Exchange Commission.

Dave & Buster’s Entertainment (NASDAQ:PLAY) last announced its quarterly earnings results on Thursday, June 11th. The restaurant operator reported ($1.37) EPS for the quarter, missing the Zacks’ consensus estimate of ($0.85) by ($0.52). The business had revenue of $159.80 million for the quarter, compared to the consensus estimate of $167.83 million. Dave & Buster’s Entertainment had a net margin of 1.24% and a return on equity of 8.89%. The business’s revenue for the quarter was down 56.1% compared to the same quarter last year. During the same quarter last year, the firm posted $1.13 EPS. Equities research analysts forecast that Dave & Buster’s Entertainment Inc will post -3.42 earnings per share for the current year.

Dave & Buster's Entertainment, Inc owns and operates entertainment and dining venues for adults and families. Its venues offer a menu of entrees and appetizers, as well as a selection of non-alcoholic and alcoholic beverages; and an assortment of entertainment attractions centered on playing games and watching live sports, and other televised events.

Featured Article: How Investors Can Profit from Options Trading 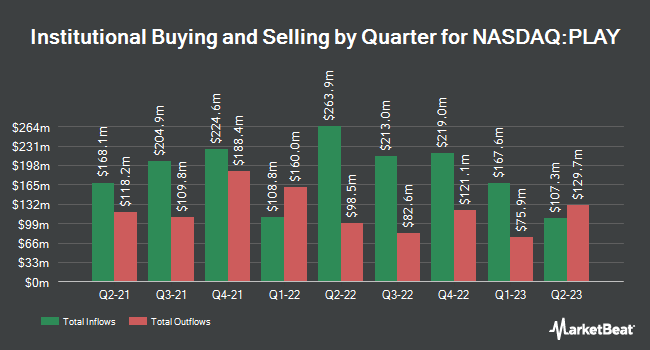