Complete the form below to receive the latest headlines and analysts' recommendations for Gaia with our free daily email newsletter:

Brokerages predict that Gaia Inc (NASDAQ:GAIA) will report $16.03 million in sales for the current fiscal quarter, Zacks reports. Two analysts have provided estimates for Gaia’s earnings. The highest sales estimate is $16.59 million and the lowest is $15.47 million. Gaia reported sales of $13.16 million during the same quarter last year, which indicates a positive year-over-year growth rate of 21.8%. The firm is scheduled to announce its next earnings report on Monday, August 3rd.

According to Zacks, analysts expect that Gaia will report full-year sales of $65.37 million for the current financial year, with estimates ranging from $64.23 million to $66.51 million. For the next year, analysts forecast that the company will report sales of $81.25 million, with estimates ranging from $80.39 million to $82.10 million. Zacks Investment Research’s sales averages are an average based on a survey of research firms that that provide coverage for Gaia.

Gaia (NASDAQ:GAIA) last released its quarterly earnings results on Monday, April 27th. The company reported ($0.19) earnings per share (EPS) for the quarter, missing the Thomson Reuters’ consensus estimate of ($0.16) by ($0.03). Gaia had a negative return on equity of 21.44% and a negative net margin of 26.78%. The firm had revenue of $14.51 million for the quarter, compared to analyst estimates of $15.06 million.

Gaia, Inc operates a digital video subscription service and online community that caters underserved subscriber base worldwide. The company has a digital content library of approximately 8,000 titles available to its subscribers on Internet-connected devices. Its subscribers have access to a library of films, documentaries, interviews, yoga classes, transformation related content, and others for digital streaming.

Featured Article: What does a hold rating mean? 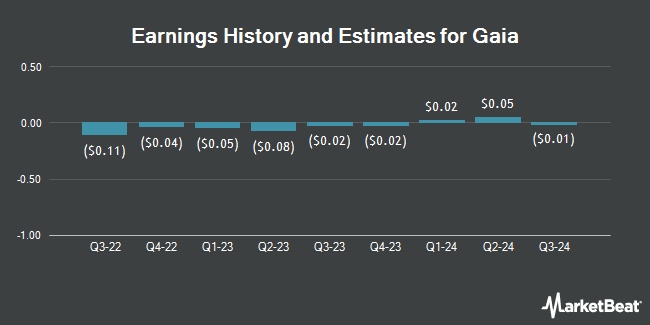 Receive News & Ratings for Gaia Daily - Enter your email address below to receive a concise daily summary of the latest news and analysts' ratings for Gaia and related companies with MarketBeat.com's FREE daily email newsletter.