Complete the form below to receive the latest headlines and analysts' recommendations for Teekay with our free daily email newsletter:

BNP Paribas Arbitrage SA raised its holdings in shares of Teekay Co. (NYSE:TK) by 27.7% in the 1st quarter, according to the company in its most recent disclosure with the Securities & Exchange Commission. The firm owned 21,408 shares of the shipping company’s stock after buying an additional 4,643 shares during the period. BNP Paribas Arbitrage SA’s holdings in Teekay were worth $68,000 at the end of the most recent reporting period.

Teekay (NYSE:TK) last posted its quarterly earnings results on Thursday, May 21st. The shipping company reported $0.25 EPS for the quarter, beating the Zacks’ consensus estimate of $0.11 by $0.14. Teekay had a negative net margin of 13.70% and a positive return on equity of 0.75%. The firm had revenue of $452.49 million for the quarter.

Separately, ValuEngine raised shares of Teekay from a “hold” rating to a “buy” rating in a research note on Friday, May 1st. 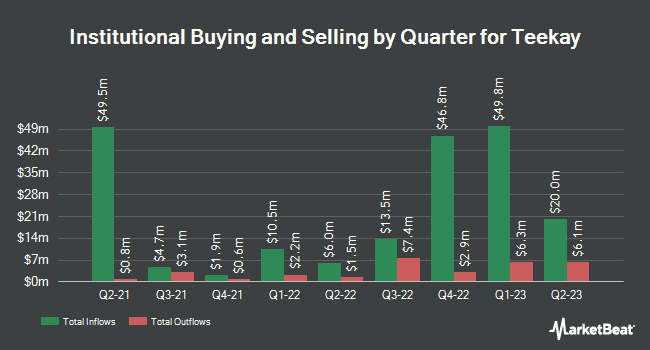 Receive News & Ratings for Teekay Daily - Enter your email address below to receive a concise daily summary of the latest news and analysts' ratings for Teekay and related companies with MarketBeat.com's FREE daily email newsletter.