Victory Capital Management Inc. lowered its stake in Agios Pharmaceuticals Inc (NASDAQ:AGIO) by 20.4% during the first quarter, according to its most recent disclosure with the Securities and Exchange Commission (SEC). The fund owned 7,596 shares of the biopharmaceutical company’s stock after selling 1,952 shares during the quarter. Victory Capital Management Inc.’s holdings in Agios Pharmaceuticals were worth $270,000 at the end of the most recent quarter.

In other news, insider Christopher Bowden sold 3,583 shares of the stock in a transaction that occurred on Wednesday, May 20th. The stock was sold at an average price of $50.01, for a total value of $179,185.83. The transaction was disclosed in a filing with the Securities & Exchange Commission, which can be accessed through this hyperlink. 3.16% of the stock is currently owned by corporate insiders.

Agios Pharmaceuticals (NASDAQ:AGIO) last announced its quarterly earnings results on Thursday, April 30th. The biopharmaceutical company reported ($0.59) EPS for the quarter, beating the Thomson Reuters’ consensus estimate of ($1.67) by $1.08. The company had revenue of $87.10 million for the quarter, compared to analyst estimates of $31.12 million. Agios Pharmaceuticals had a negative net margin of 205.20% and a negative return on equity of 63.85%. The firm’s revenue was up 188.4% on a year-over-year basis. During the same period in the prior year, the firm posted ($1.59) earnings per share. As a group, research analysts expect that Agios Pharmaceuticals Inc will post -4.67 earnings per share for the current fiscal year.

Want to see what other hedge funds are holding AGIO? Visit HoldingsChannel.com to get the latest 13F filings and insider trades for Agios Pharmaceuticals Inc (NASDAQ:AGIO). 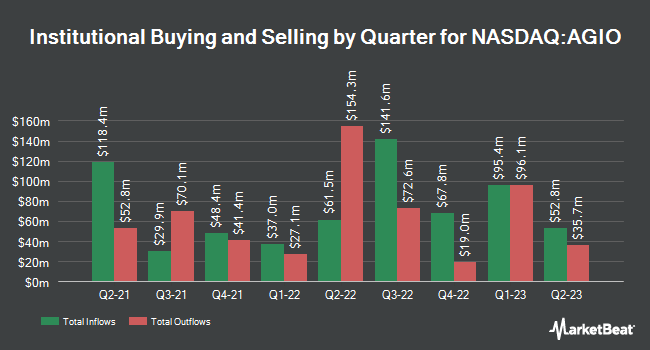