Brokerages expect Agios Pharmaceuticals Inc (NASDAQ:AGIO) to report $35.36 million in sales for the current quarter, according to Zacks Investment Research. Four analysts have issued estimates for Agios Pharmaceuticals’ earnings, with estimates ranging from $28.70 million to $40.21 million. Agios Pharmaceuticals posted sales of $26.22 million during the same quarter last year, which suggests a positive year-over-year growth rate of 34.9%. The firm is scheduled to announce its next quarterly earnings results on Thursday, August 6th.

According to Zacks, analysts expect that Agios Pharmaceuticals will report full year sales of $209.41 million for the current year, with estimates ranging from $174.00 million to $244.63 million. For the next fiscal year, analysts forecast that the business will report sales of $385.36 million, with estimates ranging from $155.00 million to $913.34 million. Zacks’ sales calculations are an average based on a survey of sell-side research firms that follow Agios Pharmaceuticals.

Agios Pharmaceuticals (NASDAQ:AGIO) last released its quarterly earnings results on Thursday, April 30th. The biopharmaceutical company reported ($0.59) earnings per share for the quarter, topping the Zacks’ consensus estimate of ($1.67) by $1.08. The company had revenue of $87.10 million during the quarter, compared to analysts’ expectations of $31.12 million. Agios Pharmaceuticals had a negative return on equity of 63.85% and a negative net margin of 205.20%. The business’s revenue for the quarter was up 188.4% compared to the same quarter last year. During the same period in the previous year, the firm posted ($1.59) earnings per share.

In other Agios Pharmaceuticals news, insider Christopher Bowden sold 3,583 shares of the stock in a transaction on Wednesday, May 20th. The stock was sold at an average price of $50.01, for a total transaction of $179,185.83. The sale was disclosed in a document filed with the Securities & Exchange Commission, which can be accessed through this hyperlink. 3.16% of the stock is owned by company insiders.

Further Reading: How to execute a trade ex-dividend strategy? 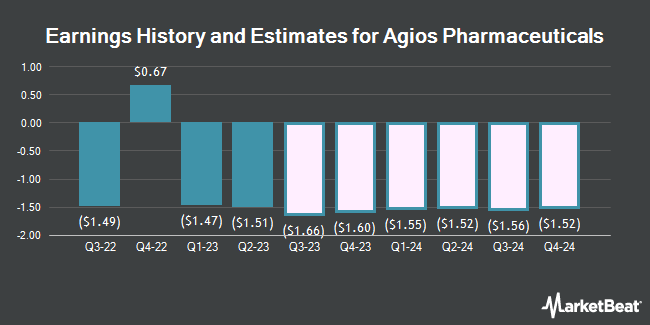