Complete the form below to receive the latest headlines and analysts' recommendations for Groupon with our free daily email newsletter:

Analysts predict that Groupon Inc (NASDAQ:GRPN) will report earnings of ($2.01) per share for the current quarter, Zacks Investment Research reports. Three analysts have made estimates for Groupon’s earnings. The highest EPS estimate is ($1.60) and the lowest is ($2.40). Groupon reported earnings per share of $0.20 in the same quarter last year, which would suggest a negative year-over-year growth rate of 1,105%. The company is expected to issue its next earnings report on Tuesday, August 4th.

On average, analysts expect that Groupon will report full-year earnings of ($5.10) per share for the current financial year, with EPS estimates ranging from ($5.66) to ($4.52). For the next financial year, analysts anticipate that the firm will report earnings of ($0.71) per share, with EPS estimates ranging from ($1.56) to $0.17. Zacks’ EPS averages are a mean average based on a survey of sell-side analysts that follow Groupon.

Groupon (NASDAQ:GRPN) last posted its quarterly earnings results on Tuesday, June 16th. The coupon company reported ($1.63) earnings per share for the quarter, topping the Zacks’ consensus estimate of ($3.00) by $1.37. The business had revenue of $374.15 million during the quarter, compared to the consensus estimate of $377.60 million. Groupon had a negative net margin of 9.60% and a negative return on equity of 16.63%.

In other Groupon news, Director Eric P. Lefkofsky bought 250,000 shares of Groupon stock in a transaction on Thursday, June 18th. The stock was bought at an average price of $21.57 per share, with a total value of $5,392,500.00. Following the completion of the acquisition, the director now owns 1,617,952 shares in the company, valued at $34,899,224.64. The purchase was disclosed in a filing with the Securities & Exchange Commission, which can be accessed through this hyperlink. Also, Director Theodore Leonsis acquired 1,000,000 shares of the firm’s stock in a transaction that occurred on Monday, April 20th. The shares were bought at an average cost of $0.95 per share, for a total transaction of $950,000.00. Following the acquisition, the director now owns 2,629,996 shares of the company’s stock, valued at approximately $2,498,496.20. The disclosure for this purchase can be found here. 14.00% of the stock is owned by insiders.

Groupon, Inc operates online local commerce marketplaces that connect merchants to consumers by offering goods and services at a discount in North America and internationally. The company provides deals in various categories, including events and activities, beauty and spa, health and fitness, food and drink, home and garden, and automotive; and deals on various product lines, such as electronics, sporting goods, jewelry, toys, household items, and apparel, as well as discounted and market rates for hotel, airfare, and package deals. 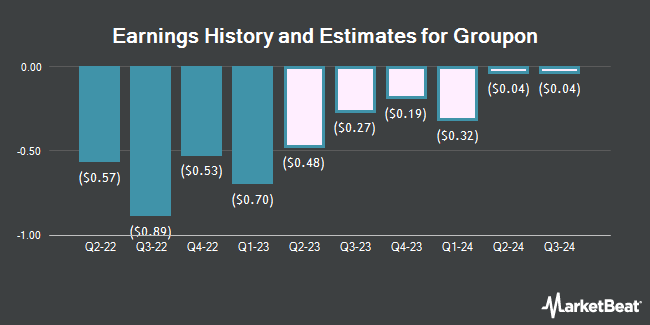 Receive News & Ratings for Groupon Daily - Enter your email address below to receive a concise daily summary of the latest news and analysts' ratings for Groupon and related companies with MarketBeat.com's FREE daily email newsletter.