Complete the form below to receive the latest headlines and analysts' recommendations for Goldman Sachs BDC with our free daily email newsletter:

Colony Group LLC acquired a new position in Goldman Sachs BDC Inc (NYSE:GSBD) in the fourth quarter, according to its most recent filing with the Securities and Exchange Commission (SEC). The firm acquired 146,882 shares of the financial services provider’s stock, valued at approximately $3,126,000. Colony Group LLC owned 0.36% of Goldman Sachs BDC as of its most recent SEC filing.

The firm also recently announced a quarterly dividend, which will be paid on Wednesday, April 15th. Investors of record on Tuesday, March 31st will be paid a dividend of $0.45 per share. The ex-dividend date is Monday, March 30th. This represents a $1.80 dividend on an annualized basis and a yield of 14.49%. Goldman Sachs BDC’s payout ratio is 90.91%.

Want to see what other hedge funds are holding GSBD? Visit HoldingsChannel.com to get the latest 13F filings and insider trades for Goldman Sachs BDC Inc (NYSE:GSBD). 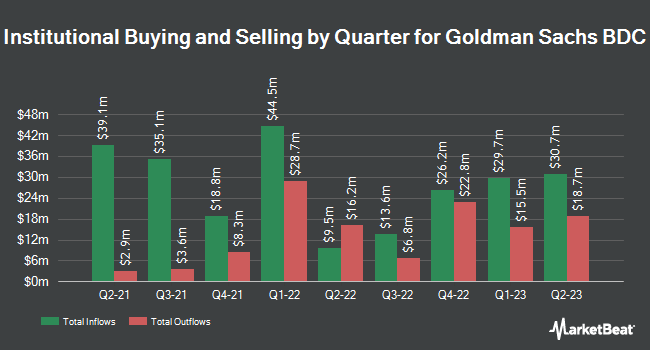