Complete the form below to receive the latest headlines and analysts' recommendations for Jagged Peak Energy with our free daily email newsletter:

Shares of Jagged Peak Energy Inc (NYSE:JAG) have been assigned an average recommendation of “Hold” from the sixteen brokerages that are covering the firm, MarketBeat reports. Eight research analysts have rated the stock with a hold rating and seven have given a buy rating to the company. The average twelve-month price objective among brokers that have issued a report on the stock in the last year is $10.58.

Separately, UBS Group dropped their target price on Jagged Peak Energy from $10.00 to $9.00 and set a “neutral” rating on the stock in a report on Thursday, October 17th.

Jagged Peak Energy Inc operates as an independent oil and natural gas company. The company focuses on the acquisition and development of unconventional oil and associated liquids-rich natural gas reserves in the Southern Delaware basin, a sub-basin of the Permian basin of West Texas. As of December 31, 2018, it held an 87% average working interest in approximately 79,500 net acres with an estimated net proved reserves of 118,890 thousand barrel of oil equivalent, as well as owned a 89% average working interest in 143 net productive wells.

Further Reading: What is FinTech? 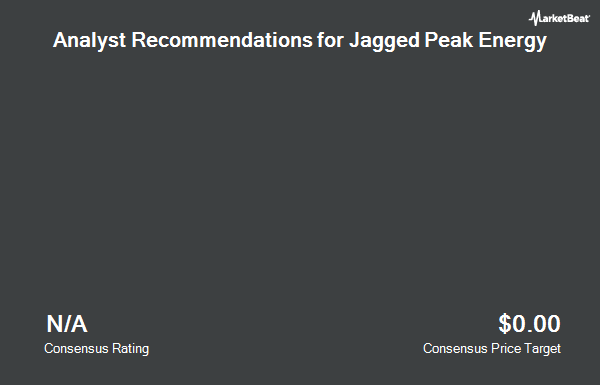