Complete the form below to receive the latest headlines and analysts' recommendations for Sunoco with our free daily email newsletter:

Ferris Capital LLC reduced its position in shares of Sunoco LP (NYSE:SUN) by 50.2% in the 4th quarter, according to its most recent disclosure with the Securities & Exchange Commission. The institutional investor owned 10,500 shares of the oil and gas company’s stock after selling 10,599 shares during the period. Ferris Capital LLC’s holdings in Sunoco were worth $321,000 as of its most recent SEC filing.

In other news, insider Arnold Dodderer sold 5,711 shares of the stock in a transaction that occurred on Friday, December 6th. The shares were sold at an average price of $30.16, for a total value of $172,243.76. Following the sale, the insider now directly owns 46,787 shares in the company, valued at $1,411,095.92. The transaction was disclosed in a document filed with the Securities & Exchange Commission, which can be accessed through the SEC website. Also, insider Machell Simon purchased 6,305 shares of the stock in a transaction dated Thursday, October 31st. The stock was acquired at an average price of $13.45 per share, for a total transaction of $84,802.25.

Sunoco (NYSE:SUN) last released its quarterly earnings results on Wednesday, November 6th. The oil and gas company reported $0.57 EPS for the quarter, missing the consensus estimate of $0.81 by ($0.24). The business had revenue of $4.33 billion during the quarter, compared to analyst estimates of $4.41 billion. Sunoco had a net margin of 0.96% and a return on equity of 31.52%. The firm’s revenue for the quarter was down 9.0% compared to the same quarter last year. During the same quarter in the prior year, the company earned $1.15 earnings per share. As a group, sell-side analysts anticipate that Sunoco LP will post 2.01 earnings per share for the current year. 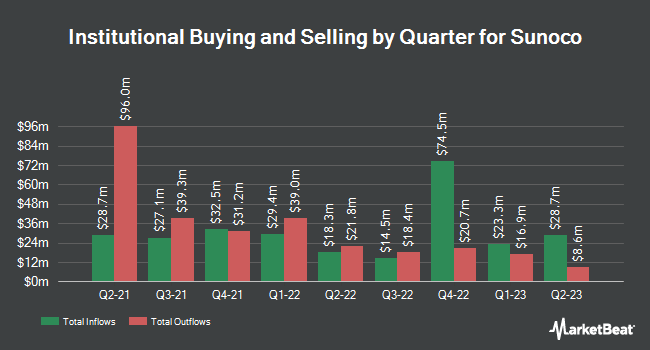 Receive News & Ratings for Sunoco Daily - Enter your email address below to receive a concise daily summary of the latest news and analysts' ratings for Sunoco and related companies with MarketBeat.com's FREE daily email newsletter.