Complete the form below to receive the latest headlines and analysts' recommendations for Aduro BioTech with our free daily email newsletter:

Aduro BioTech Inc (NASDAQ:ADRO) has received a consensus rating of “Hold” from the ten analysts that are covering the stock, Marketbeat.com reports. Six investment analysts have rated the stock with a hold rating and four have given a buy rating to the company. The average twelve-month price objective among analysts that have issued a report on the stock in the last year is $6.50.

Aduro BioTech (NASDAQ:ADRO) last posted its quarterly earnings data on Thursday, November 7th. The biotechnology company reported ($0.20) EPS for the quarter, beating analysts’ consensus estimates of ($0.23) by $0.03. The business had revenue of $4.80 million for the quarter, compared to analyst estimates of $4.55 million. Aduro BioTech had a negative return on equity of 78.64% and a negative net margin of 544.94%. As a group, equities research analysts anticipate that Aduro BioTech will post -0.99 EPS for the current fiscal year.

In related news, insider Elsas Andrea Van sold 73,311 shares of the stock in a transaction dated Friday, January 3rd. The stock was sold at an average price of $1.19, for a total transaction of $87,240.09. Following the transaction, the insider now directly owns 445,190 shares in the company, valued at $529,776.10. The transaction was disclosed in a document filed with the Securities & Exchange Commission, which is accessible through this link. Insiders have sold 80,880 shares of company stock worth $96,020 over the last quarter. 5.20% of the stock is currently owned by company insiders. 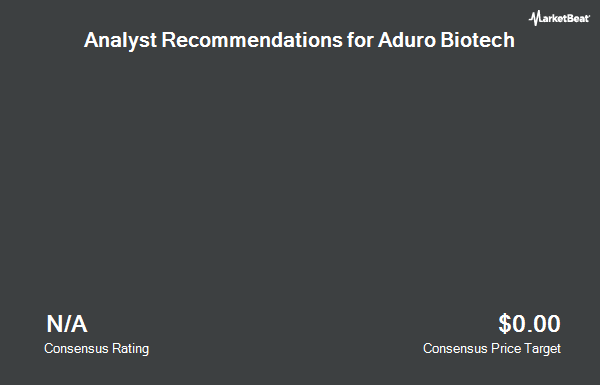