Complete the form below to receive the latest headlines and analysts' recommendations for DHI Group with our free daily email newsletter:

Equities analysts predict that DHI Group Inc (NYSE:DHX) will announce $37.23 million in sales for the current quarter, according to Zacks Investment Research. Two analysts have provided estimates for DHI Group’s earnings, with the lowest sales estimate coming in at $37.20 million and the highest estimate coming in at $37.26 million. DHI Group reported sales of $37.99 million in the same quarter last year, which indicates a negative year over year growth rate of 2%. The firm is expected to issue its next quarterly earnings results on Thursday, February 6th.

On average, analysts expect that DHI Group will report full year sales of $148.89 million for the current financial year, with estimates ranging from $148.86 million to $148.92 million. For the next year, analysts forecast that the firm will report sales of $153.47 million, with estimates ranging from $152.85 million to $154.09 million. Zacks’ sales averages are an average based on a survey of sell-side analysts that that provide coverage for DHI Group.

DHI Group (NYSE:DHX) last released its quarterly earnings data on Thursday, November 7th. The technology company reported $0.08 earnings per share for the quarter, beating analysts’ consensus estimates of $0.06 by $0.02. The firm had revenue of $37.18 million during the quarter, compared to analyst estimates of $36.94 million. DHI Group had a return on equity of 8.00% and a net margin of 8.00%.

DHI Group, Inc provides data, insights, and employment connections through specialized services for technology professionals in the United States and internationally. The company operates Dice that offers job postings of technology and non-technology companies for industries, such as positions for software engineers, big data professionals, systems administrators, database specialists, project managers, and other technology and engineering professionals; and ClearanceJobs, an Internet-based career network, which matches security-cleared professionals with hiring companies searching for employees.

Featured Article: What causes a stock to be most active? 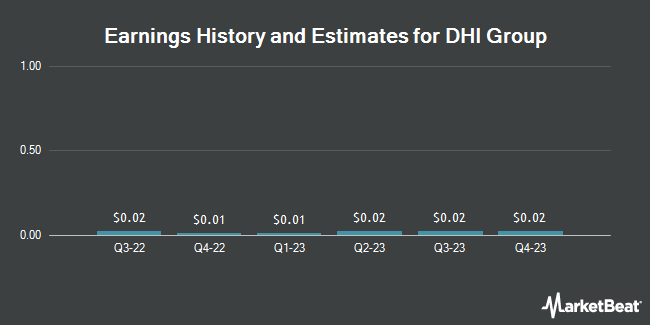