Complete the form below to receive the latest headlines and analysts' recommendations for Kohl's with our free daily email newsletter:

Kohl’s (NYSE:KSS) last announced its quarterly earnings data on Tuesday, November 19th. The company reported $0.74 earnings per share (EPS) for the quarter, missing the Zacks’ consensus estimate of $0.86 by ($0.12). The company had revenue of $4.63 billion for the quarter, compared to the consensus estimate of $4.40 billion. Kohl’s had a net margin of 3.50% and a return on equity of 15.19%. The firm’s quarterly revenue was up 5.9% compared to the same quarter last year. During the same period last year, the business posted $0.98 earnings per share. As a group, equities analysts expect that Kohl’s will post 4.84 earnings per share for the current fiscal year.

Kohl's Corporation operates as an omni-channel retailer in the United States. Its stores and Website offer apparel, footwear, accessories, beauty, and home products. As of February 3, 2018, it operated 1,158 department stores; a Website Kohls.com; and 12 FILA outlets, and 4 Off-Aisle clearance centers.

See Also: What is dividend yield? 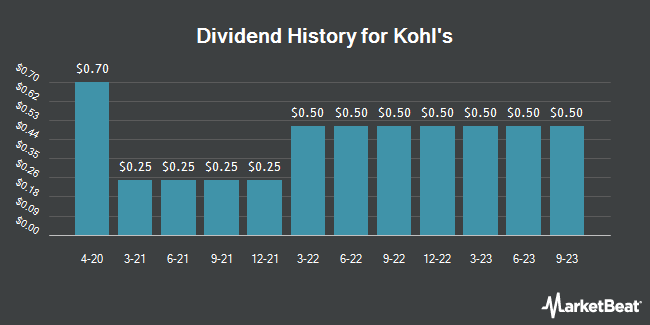 Receive News & Ratings for Kohl's Daily - Enter your email address below to receive a concise daily summary of the latest news and analysts' ratings for Kohl's and related companies with MarketBeat.com's FREE daily email newsletter.