Complete the form below to receive the latest headlines and analysts' recommendations for ICU Medical with our free daily email newsletter:

Public Employees Retirement System of Ohio lifted its holdings in shares of ICU Medical, Incorporated (NASDAQ:ICUI) by 14.9% in the third quarter, according to the company in its most recent disclosure with the Securities & Exchange Commission. The institutional investor owned 21,915 shares of the medical instruments supplier’s stock after acquiring an additional 2,850 shares during the quarter. Public Employees Retirement System of Ohio owned approximately 0.11% of ICU Medical worth $3,498,000 as of its most recent filing with the Securities & Exchange Commission.

ICU Medical (NASDAQ:ICUI) last announced its quarterly earnings data on Monday, November 11th. The medical instruments supplier reported $1.65 earnings per share for the quarter, topping the Zacks’ consensus estimate of $1.62 by $0.03. The business had revenue of $307.47 million for the quarter, compared to analysts’ expectations of $297.83 million. ICU Medical had a net margin of 5.66% and a return on equity of 12.13%. The business’s revenue was down 6.0% compared to the same quarter last year. During the same quarter in the prior year, the company earned $1.85 earnings per share. On average, research analysts anticipate that ICU Medical, Incorporated will post 7.1 earnings per share for the current year.

Recommended Story: How does a 12b-1 fee affect fund performance? 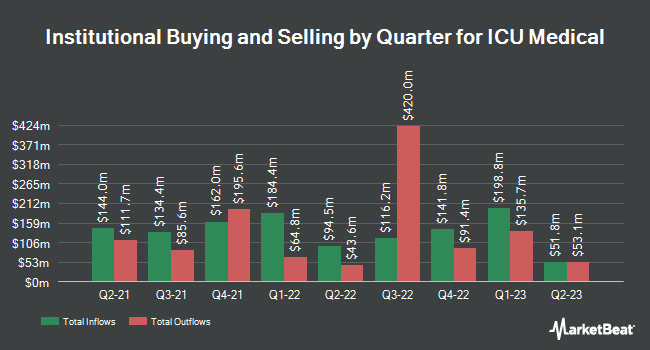