Complete the form below to receive the latest headlines and analysts' recommendations for Constellium with our free daily email newsletter:

$1.50 Billion in Sales Expected for Constellium NV (NYSE:CSTM) This Quarter

Wall Street brokerages forecast that Constellium NV (NYSE:CSTM) will post sales of $1.50 billion for the current quarter, according to Zacks Investment Research. Four analysts have issued estimates for Constellium’s earnings. The highest sales estimate is $1.56 billion and the lowest is $1.42 billion. Constellium posted sales of $1.60 billion in the same quarter last year, which would indicate a negative year-over-year growth rate of 6.3%. The firm is scheduled to announce its next earnings results on Thursday, February 20th.

According to Zacks, analysts expect that Constellium will report full year sales of $6.54 billion for the current financial year, with estimates ranging from $6.46 billion to $6.60 billion. For the next fiscal year, analysts anticipate that the company will post sales of $6.44 billion, with estimates ranging from $5.61 billion to $7.01 billion. Zacks’ sales calculations are a mean average based on a survey of research analysts that cover Constellium.

Constellium (NYSE:CSTM) last released its quarterly earnings results on Wednesday, October 23rd. The industrial products company reported $0.01 EPS for the quarter, missing analysts’ consensus estimates of $0.28 by ($0.27). Constellium had a negative net margin of 0.28% and a negative return on equity of 12.92%. The firm had revenue of $1.46 billion for the quarter, compared to analysts’ expectations of $1.45 billion. During the same quarter last year, the firm earned $1.54 earnings per share. The firm’s revenue for the quarter was up 2.3% on a year-over-year basis.

Several research analysts have recently issued reports on CSTM shares. Credit Suisse Group upped their target price on shares of Constellium from $20.00 to $23.00 and gave the stock an “outperform” rating in a research note on Tuesday, October 15th. ValuEngine downgraded shares of Constellium from a “buy” rating to a “hold” rating in a research note on Saturday, October 5th.

Recommended Story: Does the Dogs of the Dow strategy work? 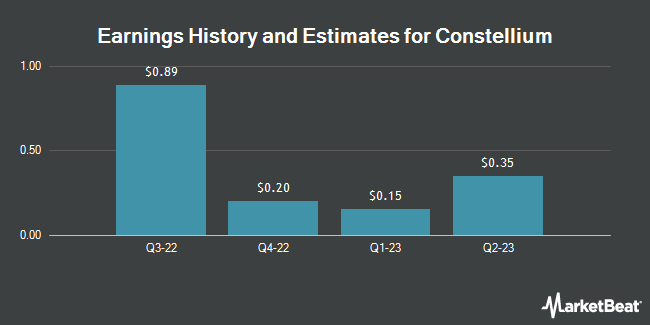