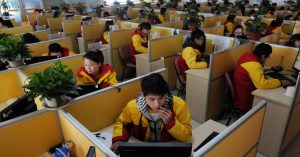 China’s No. 1 e-commerce company, Alibaba, beat estimates by analysts with an increase of 56% in revenue for the first quarter, driven by strong sales online.

Thursday’s results indicate Alibaba Group Holding, one of the most valuable companies in Asia, continues to generate the biggest share of its overall revenue via e-commerce, despite the strong growth seen in its cloud and entertainment businesses.

Sales on the e-commerce platform of the company represented 86% of overall revenue for the quarter through June 30, which was up from the same period last year of 73%.

Alibaba shares have increased during 2017 by 81%, buoyed by predictions by the company of strong revenue growth for the full year of 45% to 49%.

CEO Daniel Zhang confirmed as well that the company led an investment of $1.1 billion in Tokopedia a retailer in Southeast Asia adding to its growing network of assets for that region.

During June, Alibaba invested another $1 billion in Lazada Group, an e-commerce platform based in Singapore. It has targeted as well new merchants based in the U.S. and Russia as part of its wider plan to increase revenues and attract customers outside China.

During a conversation via telephone with analysts Thursday, executives at Alibaba said the company is expecting more contribution from initiatives offline as part of new strategy called “new retail.”

Although, Alibaba has not yet proven the value of a number of recent offline large-scale investments, say analysts, including an infusion of $1.6 billion into Intime Retail Group a chain of department stores.

Alibaba’s revenue increased to just over 50.1 billion yuan or $7.51 billion for its three months through the end of June, in comparison to analyst estimates of 47.7 billion yuan.

In its cloud business, its revenue increased by over 96% for the quarter, ending at 2.4 billion yuan, with paying clients exceeding the 1 million plateau for just the first time, compared to 577,000 for the same period last year.

The cloud business for Alibaba boosted its data centers worldwide to 17 during its first quarter, with two more additions in Indonesia and India.

Revenue for its entertainment business increased 30% to end the quarter at 4 billion.

Attributable net income to shareholders for the company nearly doubled ending the quarter at $2.17 billion equal to 83 cents a share.

Shares of e-commerce companies in China, including JD.com and Aliabab.com have outperformed the rest of the market during 2017.