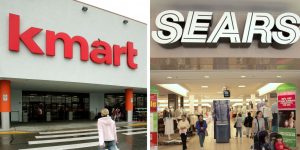 Sears Holding, the Sears and Kmart parent company, announced late this week that it would be shuttering eight namesake Sears stores and another 35 Kmart stores, adding to the already listed 236 stores that it announced it is planning to close before the end of 2017.

With the latest round of store closings, Sears Holdings will be closing down approximately 20% of its overall locations. The company announced in a post on its blog that the store closings are just part of its ongoing effort of focusing on its best stores and its return to profitability.

CEO of Sears Eddie Lampert said that it was part of the company’s strategy for addressing both losses from stores that are unprofitable and to lower the overall square footage of stores due to many being just too large for the company’s current needs.

Sears said it had been focusing on increasing its online sales and is testing out a new concept store that is small and specialized that offers bestselling items from Sears.

Streamlining the overall retail footprint of the company is part of Sears’ effort to restore the confidence of vendors in Sears, said the company.

Some vendors have lowered their support for Sears during the last 12 months, thereby putting additional pressure on our business, said the blog post.

Once the largest retailer in the U.S., the company has been struggling to remain afloat, as its customers turn away from traditional shopping at brick and mortar stores to make their purchases online. Sears in March warned that it had substantial doubt in the ability to remain as a business entity.

Losses have passed the $10 billion mark since 2010, which was the last time the company was able to turn a profit. In 2012, Sears Canada was spun off, and last month had to file bankruptcy.

Sears shuttered more than 240 stores in 2016 and 53 the previous year. It is not the only retailer that is experiencing major problems.

Other department stores such as J.C. Penney and Macy’s made announcements over the last few months of store closures and layoffs. There have been close to 5,300 stores closings thus far during 2017, according to an industry think tank.

Retail is expected to continue taking it on the chin for the remainder of this year and into 2018 say industry analysts due to the continuance by consumers of shopping online for more of their needs.