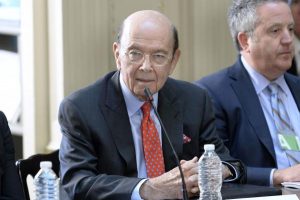 President Donald Trump is considering placing big tariffs on steel shipments into the U.S. from other countries. The president claims the steel poses a big risk to the national security.

The tariffs could be placed as high as Trump decides to put them and could easily cause countries to take retaliatory action that would hurt other industries in the U.S.

One analyst in the steel industry said that the decision could be the biggest and most important related to trade in several decades.

U.S. secretary of commerce Wilbur Ross said that his team would be announcing its results from an investigation into imports of steel before the end of June.

Experts in trade and investors on Wall Street have become convinced that tariffs will come, it is just how high they will be and on what countries.

Brazil, Canada, Japan, Mexico and the European Union are amongst the top exporters of steel to the U.S. China, which has been criticized by Trump for what he called cheating on steel prices is No. 11 in steel exports and experts in trade believe it will be a likely target for the Trump administration.

One big question many have is if Trump will impose an across the board steel tariff on all countries or just target specific countries.

One other question is will countries in turn retaliate with tariffs of their own on products from the U.S., including those not in the steel industry. This could spark a trade war that could cost some American’s their jobs.

That possibility is alarming for U.S. farmers’ advocates. The agricultural industry in the U.S. exports 25% of its products.

It is a huge deal and many are worried about it, says one economist with the American Farm Bureau, which represents more than 6 million farmers in the U.S. The potential exists of retaliatory measures taken by other countries.

An official with the Department of Commerce said that businesses in the U.S. should feel assured that Secretary Ross makes a reasoned and methodical approach to all the recommendations that he makes to President Trump.

A law from 1962 allows Ross to skirt the independent panel of trade judges in the U.S. and make the decision himself of tariffs for steel.

By invoking the U.S. national security, the White House has broad powers in determining how big and broad any tariffs it imposes will be.

The White House argues that the U.S. has become too dependent on imported steel for its infrastructure and military equipment.